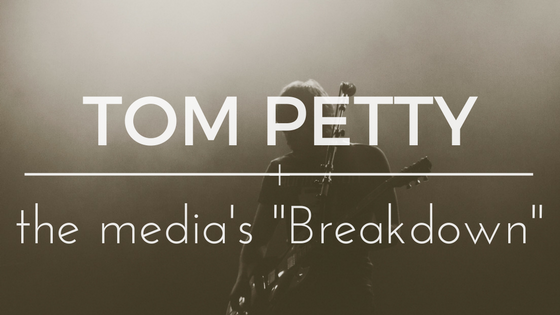 Are you getting déjà vu? Don’t worry, us too. That is because the media reported that Tom Petty had already died earlier that afternoon.

The news first broke around 3 p.m. that Petty had been rushed to the hospital after he was found unconscious and in full cardiac arrest. That was all accurate information, but here is where things start to get fuzzy: follow-up reports came out several hours later saying Petty was brain dead and his family chose to pull life support.

Just one problem, he was still alive. The false reports spread like wildfire and pretty soon the news was everywhere.

So, how exactly did the media accidentally kill Tom Petty?

They didn’t fact check. Verifying facts before reporting them is crucial, especially when it comes to someone’s death. This is a corner that cannot be cut, regardless of how urgent the news might seem.

They didn’t fact check. Again. Some initial reports cited the LAPD, which seems like a valid enough source, but chances are someone from the department spoke out of turn to the media and didn’t have the facts correct.

They hopped on the bandwagon.  Once one source shared the false news of Petty’s death, it started a domino effect with other media outlets. Just because everyone else is reporting it, doesn’t make it valid. Despite being considered a major offense in the journalism world, mistakes like this happen often. In Sept. 2016, a journalist reported that Carlos Santana was found dead in his car, but later apologized, saying it was false and against the publication’s policy to rely on a single source.

Crisis communication, including death, should not start and end with reporters. It is important for anyone within the communications industry — or even anyone sharing content on social media — to do some research before spreading the information.