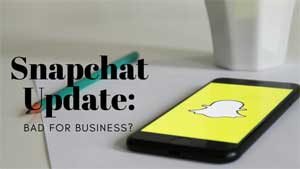 As you have probably already seen or heard, Snapchat has rolled out a new update. The update was originally announced at the end of 2017 but hadn’t gone into effect until now. The change was intended to appeal to an older crowd in addition to bringing in more advertisers and content creators; however, the plan seems to have backfired. Not only is it looking like the new layout will be bad for businesses and influencers looking to share their content, but also current users are threatening to leave the platform altogether.

Snapchat CEO, Evan Spiegel, has previously noted that he realized the app could be confusing to navigate. Instead of resolving that issue, it appears Snapchat has done the complete opposite. Users of the app have been vocal on social media throughout the past two weeks with complaints against the confusing new layout and a change.org petition titled “Remove the new Snapchat update” has surpassed one million signatures. People are undoubtedly upset about this inconvenience hindering them from connecting with friends, but what about the return on investment for businesses?

It is hard to tell if Snapchat’s intention was with businesses in mind or in complete disregard to them. On one hand, the new layout creates a separate panel for the “discovery” page, where you can view content from businesses and influencers, allowing space for more content creators on the page itself. However, it seems Snapchat missed the boat here because, in result of giving “discovery” its own panel, it combined everything else, including friend’s stories, messenger, and personal snaps, into one lone panel. These are the functions that Snapchat is predominately used for; therefore, users are less likely to navigate over to the “discovery” page. We are predicting a loss of views and money for businesses and influencers with content on the app.

So, what is Snapchat’s response to all the negativity? A spokesperson for the company said, “updates as big as this one can take a little getting used to, but we hope the community will enjoy it once they settle in.”

Hopefully, the community will “settle in” before Snapchat loses the battle to Instagram Stories, its biggest competitor.