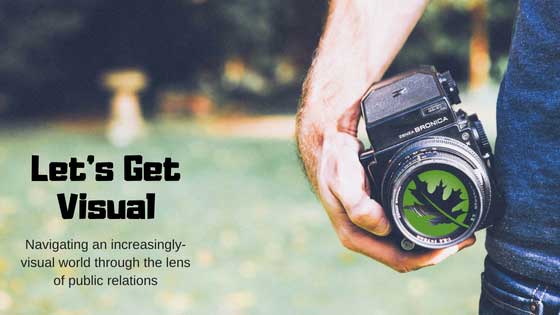 In the age of social media, the visual arts reign supreme. Just look at recent trends. Over the past five years, Instagram saw more growth in its userbase than any other social media platform. According to the Pew Research Center, more Americans use YouTube than Facebook in 2018. More people are on Snapchat these days than Twitter.

To put it simply, it’s all about visuals. So, how does this affect the PR pros among us?

No longer are words the most important ingredient to the recipe we call public relations. In a day and age where each and every person walking the streets has a high-quality camera and an HD screen built into their smartphone, photos and video are more important than ever.

That’s why it’s vital that we, as communicators, are no longer just writers or speakers, but rather content creators. Learn how to take a media-worthy photo. Pick up the basics of editing software. Know what it takes to shoot sharable video content. Stay on top of current trends, such as Instagram’s new IGTV.

But what do you do when you can’t be there to take photos or video yourself? That’s where pragmatism becomes key. You can’t expect everyone to be an expert when it comes to photography. Most people will simply pick up their phones, aim it at something they think is interesting and hit the shutter button.

But, as the more photo-savvy among us know, there’s more to it than that. That’s why the team here at Commonwealth PR have begun to use a mini photo “cheat sheet” that we send to clients when we can’t be there to gather the content we need ourselves. The tips we use are simple – three “do’s” and three “don’ts.”

Under “do’s,” we include simple, easy to remember tactics such as taking candid photos rather your typical boring, staged handshake or ribbon cutting pictures. Sure, those are worth including in the mix, but if you’re pitching a story on, for example, a benefit concert, both the media outlets you might be pitching as well as their readers are going to be much more interested in photos of people dancing in the crowd or the band in action. That’s what’s going to draw them in, not the check presentation that took place beforehand – even though that may be the news you want to spread.

For “don’ts,” we mention things like making sure to not wear sunglasses or use your camera phone’s flash. Simple things like that can ruin a perfectly good photo.

We’ve found that sharing simple tips such as these has dramatically increased the quality of photos we receive from clients after a big event; and, after all, better photos means a higher chance of landing a hit for a client.

So, don’t disregard the importance of visuals. Whether it’s you or one of your clients, find a way to include at least one compelling photo or video with each and every pitch. The chance of your story landing that much-needed hit may very well depend on it.

Looking for more PR tips? Check out our blog!