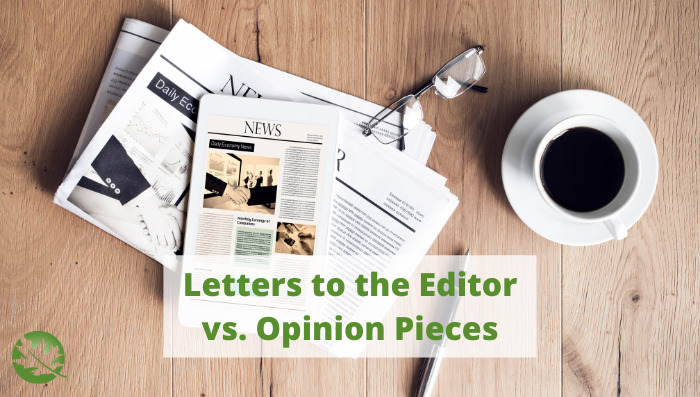 As public relations professionals, we know that no media hit is too small, and getting your brand’s name and voice out there is crucial to your organization’s reputation. Opinion pieces and letters to the editor (LTEs) are integral to a PR campaign because they can position your brand and individuals within your organization as experts on various topics. Not only do these types of channels spread the word about important issues your brand relates to, but they also help promote and boost visibility within the community.

At Commonwealth PR, we encourage our clients to use these tactics to correct information that was previously shared in a news story, oppose or support actions taken by government officials that directly affects their organization, and direct attention to a news issue that has been overlooked.

But what is the difference between an opinion piece and a letter to the editor (LTE)? To some, opinions and LTEs may seem synonymous, but there are indeed key differences between the two. Let’s dive in!

Letters to the Editor

Letters to the editor (LTEs) are somewhat straightforward. They are short pieces written in direct response to an article previously published in the paper. LTEs are almost always written by a concerned citizen who is either dissatisfied with an article, satisfied with an article, or wishes to clear up misinformation shared in story. LTEs have quite a history – they’ve been around almost as long as newspapers have!

If you wish to get your LTE placed, be sure your writing is clear and concise and keep the topic front of mind while you write. It is also imperative that the LTE be written shortly after the article in question is published. Newspapers will not be interested in LTEs in response to a story from a month ago. Lastly, be sure to cite the article you are referencing so the editor and readers know why you wrote an LTE in the first place.

Opinion pieces are otherwise known as op-eds, which means opposite the editorial page. Typically, op-eds are given a higher word count and more space than an LTE in newspapers. These pieces are most commonly written by members of the community, both well-known individuals and readers. Authors of op-eds are not commonly affiliated with the newspaper it appears in.

The main focus of an opinion piece is just as it says: to share an opinion or commentary on a particular topic. We’ve seen op-eds topics ranging from the importance of supporting small businesses all the way to up frustrations over national politics.

One thing to note is that op-eds must be approved by the opinion page/editorial editor and their editorial calendars can fill up quickly. In order to ensure your op-ed column makes it into your desired paper, it is key to make your opinion known near the beginning and use personal stories, facts and statistics to back up what you are saying.

Check out this op-ed our client, Sea Tow, wrote earlier this year: This year’s Boat Show has been canceled, but the need for boater safety never goes away.

Both LTEs and op-eds are great if you or your company wish to express an opinion, clear up information, or share important news that has yet to be covered. At Commonwealth PR, we work closely with clients to guide them on when to pursue an LTE or op-ed and which one to write. Due to our close contacts within the media, we also help get our client’s pieces published.

If your business needs help managing its brand reputation, reach out to us and let us help. We may very well decide that an op-ed or LTE would be one route to take.